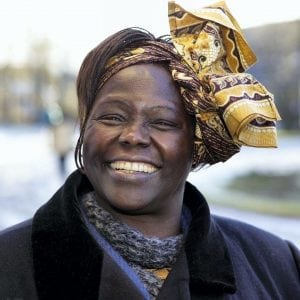 In 2007 my admiration for Wangari Maathai prompted me to contact the Green Belt Movement.
The video I sent of my Walking Treeman was put on their media page next to my now Good Friend
Paul Coleman’s video of planting trees with children in Chile.
(Since 1990 Paul Coleman has walked 47,500 km through 39 nations delivering the environmental message while on a mission to plant 100,000,000 trees, http://earthwalker.com/)
Paul saw my video on the Green Belt Movement site and emailed me an invitation to China to aid in calling attention to his Earthwalk to Beijing to promote the Greening of the 2008 Olympics.
I accepted, and that connection with Paul through the Green Belt Movement site has lead to :
planting 15,000 trees in three days on the”wet edge” of the Gobi Desert in Mongolia with 150 Japanese volunteers.
Participating in the first Earth Day Celebration in Hong Kong, Tokyo Earth Day, saving Awase Bay in Okinawa from development,
Promoting and participating in the first “International Day of Peace” in Okinawa.
All because of Wangari’s Green Belt Movement connecting us,
Bless her and them.
Rest In Peace
#WangariMaathai
Role model for earth citizens

In 1977, Maathai founded the Green Belt Movement, an environmental non-governmental organization focused on the planting of trees, environmental conservation, and women’s rights. In 1984, she was awarded the Right Livelihood Award, and in 2004, she became the first African woman to receive the Nobel Peace Prize for “her contribution to sustainable development, democracy and peace”. Maathai was an elected member of Parliament and served as assistant minister for Environment and Natural Resources in the government of President Mwai Kibaki between January 2003 and November 2005.